Home » Grow Your Own Facelift?

Although it may sound like something from a science fiction film, being able to grow your own facelift is a medical technique already practiced in America, with reports of spectacular results. The procedure – the isolagen cell storage system – is the first treatment which not only fills your wrinkles and hollows, giving the face a ‘lifting’ effect, but also repairs your skin at the same time.
It uses autologous (your body’s own) cells to create new collagen in ageing or sun-damaged areas, lips and acne scars by using the body’s cells.

In advanced facelift procedure, surgeons collect a small patch of your skin from behind your ears, isolate valuable fibroblast cells and cultivate them in a laboratory, before injecting them back into your face to fill unwanted cracks and crevices. Fibroblasts are a special type of cell (about 5 per cent of all your body’s cells) which create connective tissue and secrete collagen. These cells are particularly useful when harvested because they are the ones that are claimed to plump up your skin when re-injected into your face.

Unlike fat transfer in which fat is taken by liposuction from your bottom or thighs and transferred to your face, the new material grown by doctors from your own cells is not reabsorbed by your body, so the effect is not lost after a few months.The effect continues as your face’s natural collagen production is activated. The process introduces millions of strong new fibroblasts into the skin which integrate with the network of skin tissue, known as the dermal matrix, giving support to damaged skin and rejuvenating it. 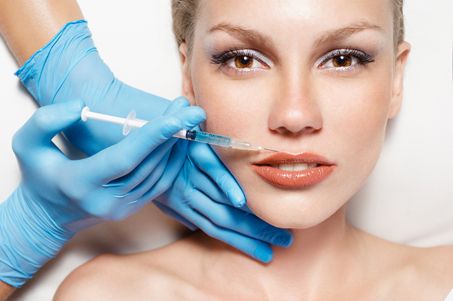 After the initial treatment, some of the cells are frozen and stored for future use – and remain the age at which they were harvested. Harley Street consultant dermatologist Dr David Fenton, one of the first doctors to perform the treatment in the UK, says: ‘This procedure opens up all kinds of opportunities – and far beyond the purely cosmetic.´One plastic surgeon, Adrian Grobbelaar, is about to start using isolagen to build up facial tissue in patients who have had cancer which has decayed their faces. It could be a fantastic breakthrough.’

The procedure is simple and a lot less painful than liposuction. The surgeon takes a biopsy – a 3mm square of skin from behind the ear under local anaesthetic – and the tissue is sent to the laboratory. The sample is put through a cell expansion process in which cells are given growth factors – chemicals which act as hormones to stimulate the cells to grow and multiply – and cultured in a mixture of nutrients and chemicals to regulate their acidity and oxygen content.

Six to eight weeks later you receive an injectable version – enough for three treatments – of your cells. These are injected in the same way as fillers such as collagen or restylane.

‘You won’t see an immediate “plumping” effect as you do with synthetic fillers,’ warns Dr Fenton. ‘The improvement is gradual as the collagen grows.

‘The first signs will be visible after around a month and the improvements will continue until you see the optimum effect a year after the injections. Patients in the U.S. say results are still excellent after seven years – but if one does need a top-up, or new wrinkles filled at a later date, then the harvested collagen-producing cells are ‘on iceî and readily available.’

What’s more, because the harvested cells remain the age they were when removed from your skin, they are younger than you are. This introduces the possibility of ‘cloned skin’ in which future generations will routinely harvest their skin when young in order to re-inject it, cloned, when they have aged, so as to rejuvenate their faces. Dr Nick Lowe, clinical professor at the University of California in Los Angeles and an adviser to Isolagen, calls such harvested samples ‘immortalised skin’.

‘You reactivate the cells,’ he explains, ‘simply to get the collagen and elastin. The collagen is the fibre under the skin that prevents sagging. The elastin is a protein that keeps skin taut.’

´One of the biggest benefits, of course,’ adds Dr Fenton, ‘is that there is no risk of the body rejecting the cells because they are your own.’

The immediate pout that celebrities such as Leslie Ash and Liz Hurley go for is not possible with isolagen. To get around this, surgeons would need to initially inject a filler such as restylane, followed by the three isolagen treatments.

As the normal filler breaks down and is absorbed into the body, the isolagen will take over and the lips would continue to stay plump. Isolagen UK – the firm responsible for developing the technology – has developed a product called ‘isofil’ based on this technique and specifically for lips which will be available at a later date.

The cost (which includes biopsy, cell processing and three injections) is £2,500, plus a surgeon’s consulting fee of about £180 and storage of cells at £282 per year. While the bill may sound steep, it would work out cheaper than having collagen, restylane or perlaine three times a year over seven years (which would leave you with a bill of at least £5,250).

The only problem with the technology to date appears to be that because your harvested fibroblast cells are living tissue, they must be put back into the body within 24 hours of leaving the laboratory after being grown.

So once you’ve made your appointment with the surgeon for the injection, you can’t postpone your home-made facelift.